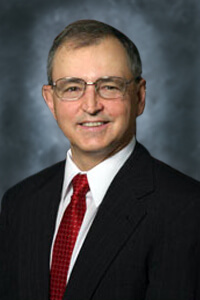 David W. Zoll is the founding partner of the law firm of Zoll & Kranz, LLC, with a practice in civil litigation. Now serving as Of Counsel to the firm, his practice in recent years has focused on representing injured people in pharmaceutical and medical device cases and complex securities and antitrust matters. He has built his practice and reputation by seeking justice on behalf of the injured against the powerful.
He has spoken before the American Association of Justice, the Ohio State Bar Association, Ohio Academy of Trial Lawyers, Lucas County Bar Association, Toledo Bar Association, Construction Financial Managers Association, Ohio Society of CPA’s, Association of General Contractors and at numerous continuing education seminars.
Zoll has handled a number of cases before the Ohio Supreme Court, including the landmark case of Anderson v. Ceccardi, 6 Ohio St.3d 110, 451 N.E.2d 780 (Ohio 1983), in which the doctrine of assumption of the risk was merged into the statutory tort scheme of comparative fault.
Zoll’s practice has focused primarily in the fields of mass torts and antitrust. He served as Liaison Counsel for Plaintiffs In re: Heparin Products Liability Litigation MDL Docket No. 1953 and was co-chair of the AAJ Heparin Litigation Group. He was special counsel on behalf of Plaintiffs in In re:Inter-Op Hip Prosthesis Liability Litigation (Sulzer). MDL Docket No. 01-CV-9000; on the Discovery Committee in In re: Vioxx ® Products Liability Litigation MDL Docket No. 1657; Plaintiffs’ Steering Committee In re: Yamaha Rhino MDL; Plaintiffs’ Steering Committee In re: Text Messaging antitrust MDL pending in Chicago. He was also involved in the Polyurethane Foam Antitrust MDL before Judge Zouhary.
Zoll and his firm were active in the Yaz/Yasmin litigation against Bayer and represented hundreds of injured women, obtaining tens of millions of dollars on their behalf. Zoll assisted partner Michelle L. Kranz, Plaintiffs’ Liaison Counsel, in the DePuy ASR Hip MDL litigation.
Zoll was co-lead trial counsel in the first and only contaminated heparin trial against Baxter Healthcare and Scientific Protein Labs (SPL), held in Cook County, Illinois in May, 2011. Zoll & Kranz, LLC filed the first lawsuits in the country in the Heparin litigation. Three of their clients testified before Congress on April 29, 2008 in the The Heparin Disaster: Chinese Counterfeits and American Failures hearing held by the House Oversight and Investigation Committee, chaired by the Hon. Bart Stupak (Michigan).
Zoll has tried cases to verdict in Chicago, Illinois; West Palm Beach, Florida; Little Rock, Arkansas; Media, Pennsylvania; Ann Arbor and Detroit, Michigan; and Lexington, Kentucky as well as throughout the state of Ohio. He has obtained a number of verdicts and settlements in excess of one million dollars on behalf of his clients. He is a 1976 graduate of the University of Toledo College of Law, and a 1974 graduate of the University of Cincinnati.
Zoll was appointed by the Lucas County Commissioners to the Board of the Lucas County Mental Health and Recovery Services, and previously served on the Lucas County Alcohol and Drug Addiction Services Board. He served on the special committee to merge the latter board with the former Mental Health Board. He was appointed by the Lucas County Commissioners to serve on the Mental Health Board Review Committee. He currently serves as a trustee of the Toledo Council of Newspaper Unions-Toledo Blade Pension Plan. He has served on the Boards of the following charitable or religious organizations: Board of Directors Camp Storer-Toledo YMCA; Beach House Family Shelter; and Christ Presbyterian Church Board of Deacons.
Zoll was also on the Board of Examiners of the NBTA. He wrote and graded the Commercial Law (2005), Civil Ethics (2007, 2009, 2010) and Evidence (2008) questions for the nationwide examinations for board certification.
Consecutively since 2008, he has been designated as an “Ohio Super Lawyer”. He has also been listed as one of the “Top 100 Trial Lawyers” by the American Trial Lawyers Association and AV Peer Review Rated 4.9 out of 5 on Martindale-Hubbell.