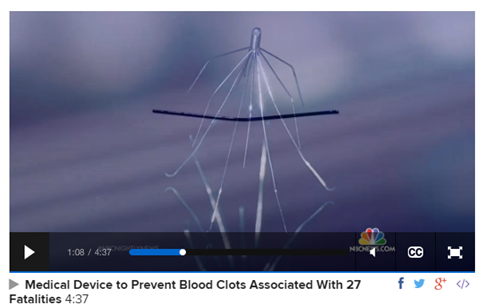 A NBC News report aired last night on the IVC Recovery filter questions this medical device and if the manufacturer, C.R. Bard, knew about the potentially fatal flaws. As a defective medical device law firm we have been investigating IVC Filters as well and we are happy to see NBC Nightly News share these important findings with the public.

Turns out, through their investigation, a public-relations firm hired by Bard warned the medical device company of “unfavorable press” that would impact their stock prices negatively. Furthermore, Bard hired an outside doctor to conduct a study obtained by NBC News which states, the “filter had higher rates of relative risk for death, filter fracture and movement than all its competitors…and further investigation…is urgently warranted.” A veteran regulatory specialist recruited (in 2002) to help with the FDA clearance application mentioned to NBC News that she was concerned the product would cause problems and important safety performance test results weren’t given to her. When she questioned this she was told if she pursued the matter further she would be removed from the team.

According to NBC News, there have been 27 deaths and approximately 300 non-fatal problems reported to date.

As you will find on our website, IVC FILTER LAWSUIT | FRACTURES, MIGRATION, TILT AND PERFORATION, FDA Safety Communications started in 2010. Bard has sold thousands (34,000 according the news report) of the IVC Recovery Filters allegedly with the knowledge of the potential fatal adverse events.

NBC News said there’s another story that will air on this topic. We represent those unfortunately injured by medical devices such as these. If you would like to talk to an attorney at Zoll & Kranz about our investigation or even receive a complimentary initial case evaluation, please fill out the form on this page or call toll-free at 888-841-9623.