Here are brief details about this litigation:

Unfortunately, lawsuits allege that these earplugs did not operate as they were intended due to a design defect. The alleged design defect exposed U.S. military personnel to dangerous levels of sound and impulse noises, potentially causing hearing loss and tinnitus (ringing in the ears). There are further allegations that Aearo technologies and 3M knew about these defects but provided the defective earplugs anyway without giving any warning about the dangers they posed or ways to minimize the risks.

If you served in the military, believe you used these dual-ended earplugs and have been diagnosed with hearing loss, you may have a potential product liability claim.

A False Claims Act case, or Qui Tam case, was filed against 3M in May 2016 alleging that 3M provided defective dual-ended earplugs that were tested with methods that did not comply with accepted standards and that 3M knowingly claimed Noise Reduction Ratings (NRR) that did not match the actual performance of the earplugs.  The Qui Tam case also alleged that 3M submitted false claims to the U.S. government in supplying and requesting payment for the Dual-Ended Combat Arms™ Earplugs, version 2 (CAEv2),  without disclosing the alleged design defect, flawed testing or inaccurate NRR that exposed U.S. military personnel to serious risk of hearing loss. A settlement between 3M and the U.S. Government was announced in July 2018, with 3M agreeing to pay $9.1 million dollars without making any admissions as to their liability.

The Earplug and Its Alleged Defects

Current information suggests that from 2003-2015, the Combat Arm were the only dual-ended earplugs used by members of the U.S. Armed Forces.  As described above, they were easily distinguished by their double cone-like ends that were olive green and yellow, respectively. 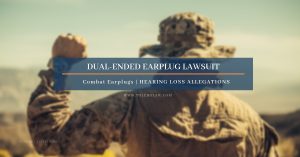 Why Another Lawsuit Against 3M?

Through the Qui Tam case, the U.S. Government was able to seek justice and compensation for its damages. But the soldiers who have been injured by the alleged defects and deception are not included in that suit and must seek any desired compensation on their own.  We value the men and women that serve our country and want to help them seek compensation for the damage to their hearing and detrimental effects on their long-term quality of life.

Learn More, Talk To Us Today.

Do You Have a Potential Hearing Loss Claim Against 3M for Their Dual-Ended Earplug?

Were you issued the dual-ended 3M earplugs? Were you overseas at the time of the following:

You may be entitled to compensation and we can assist you with a free case evaluation. Please contact us at your earliest convenience toll-free at 888-841-9623, fill out the form on this page, or utilize our 24 hour online chat services.  No company should be allowed to knowingly put U.S. service members in harm’s way, prioritize profits over the safety of soldiers bravely fighting for our country and not be held accountable.

Our attorneys are experienced plaintiff lawyers that have spent many years in the mass tort field.  We anticipate a multidistrict litigation (MDL) will be formed for these cases. This will allow veterans allegedly injured by this defective device to file individual lawsuits while consolidating work on the common aspects of the cases.  To learn more about how MDLs work and our extensive MDL experience, please visit our MDL page.